In this research project I looked into migrant legislation and analyzed diverse case-studies in the Netherlands. I found out that migrant accommodation is remarkably consistent for different migrant categories. There are some negative consequences to this consistency and policies implemented.

Zoning
There are various ad hoc accommodation solutions for different groups of migrants. Refugees that have fled their countries at war are hidden from society before gradually being introduced in the social fabric of cities. Illegal migrants are ‘imprisoned’ close to frontiers, awaiting deportation. Labour migrants fill necessary vacancies in the construction sector or agriculture and are allocated near their place of work, e.g. camping sites in Brabant region for Polish agriculture workers. The requirements of international students are an opportunity to build container complexes on university campuses. In all the cases, the policy is to classify by groups and zones. Zoning leads besides social-spatial segregation also to missed programmatic opportunities. The extra support for amenities and programs that newcomers and temporary inhabitants could create is a potential that has been rarely tapped into.

Temporariness
Often accommodation for migrants becomes a temporary landing spot to serve an immediate need, e.g. the various temporary emergency shelters and newly opened asylum seeker centers in The Netherlands in 2015/2016. The Dutch government demonstrates that it considers ‘migratory group stay’ as temporary. Consequently, housing developments follow cheap construction systems that can be build quickly. The investment of these accommodation solutions should be not too high because sooner or later the provisional project will be taken down.
The aesthetics of cheap and temporary construction can acquire multiple meanings. In case of refugee housing the sign of austerity projects inhospitality on the part of the host country, where minimum effort has been put in accommodating and facilitating integration, while giving out a message to permanent citizens that taxes are indeed used minimally to solve ’temporary crises’. Under similar conditions this provisional cheap nature of building structures offers a space of freedom, appropriation and exploration to international students who are happy to acknowledge that the accommodation is a temporary solution from which to move to something better.
What is projected as temporary structure, often works reversely with housing acquiring a permanent role of accommodation for fluctuating migrant groups. Provisional container housing for 1000 students at the Weespertrekvaart Midden area in Amsterdam was built to stand for less than 5 years, but is now already standing for 15 years. The ‘Labour Hotel’ for Polish labour migrants in Diemen was developed as a temporary structure for a duration of 5 years, but the municipality agreed to extend this period to first 10 and now 15 years. There are many more examples. Even more significant, because of the idea that the accommodation solutions for different groups of migrants are for the short-term, these projects are usually built without taking into account the surrounding public space, connectivity or long-term city development. However, in reality, these complexes are often standing for a longer time than planned in first instance.

Exclusion
Often migrant settlements exhibit a large degree of isolation from indigenous urban life. Migrant accommodation in The Netherlands is often for one specific group and operated from city life and more permanent inhabitants. Legislation is in some cases even actively aimed at discouraging newcomers to integrate in society. As French social philosopher Etienne Balibar (2004) has stated, exclusion or even ‘apartheid’ is one of the most urgent problems in contemporary Europe today. Urban life and democracy are in decline, when societies are organized based on the inclusion of some, and the exclusion of others. 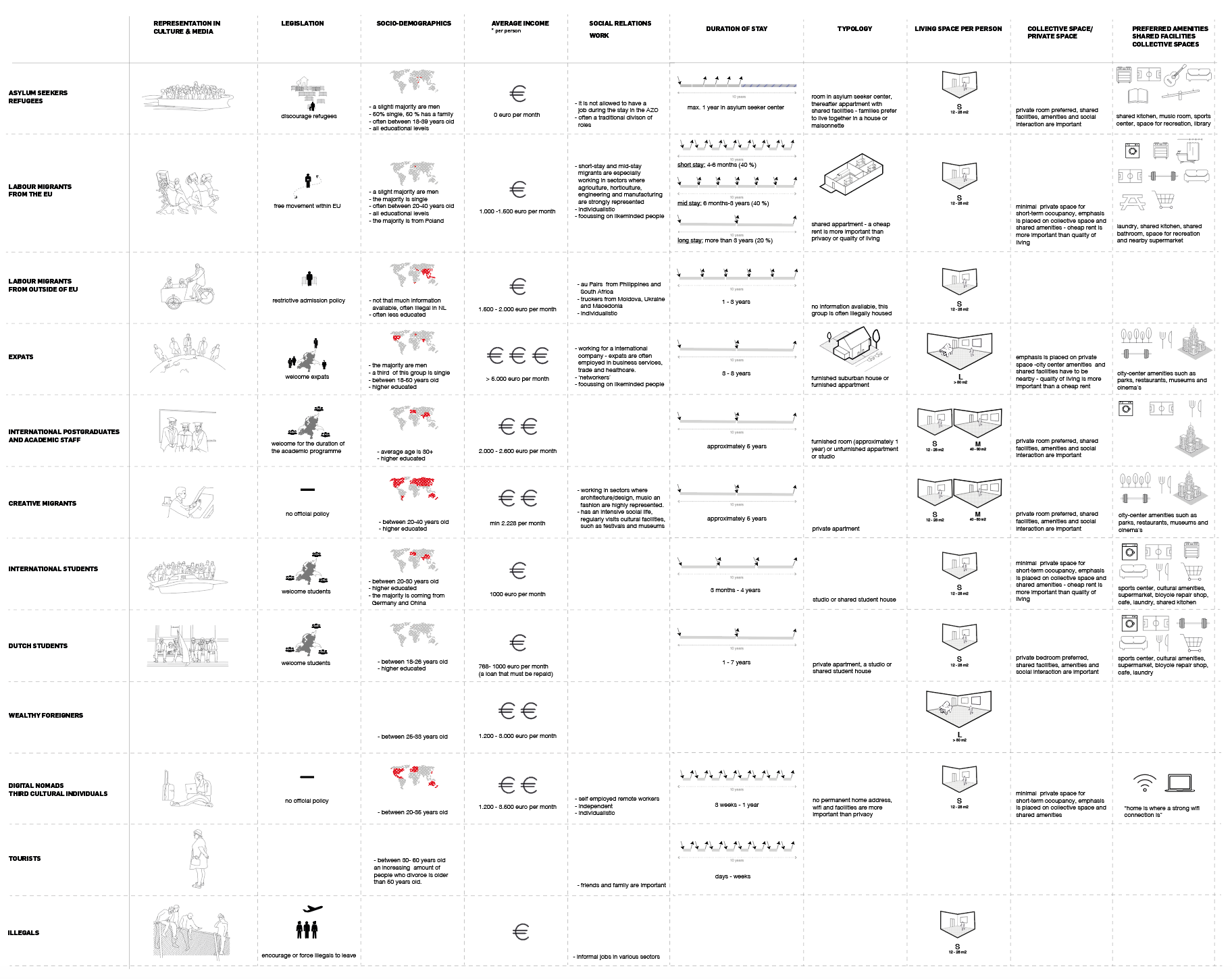